Home > Economics > Why the U.S. dollar is strengthening

Policy by the central bank, interest rate differentials and a risk haven move into U.S. dollar-denominated assets are driving up the dollar against major trading currencies.

This is a welcome development as the Federal Reserve continues to prepare investors for a significant increase in the federal funds rate that may move from its current range between zero and 25 basis points to above the Fed’s estimate of the neutral policy rate of 2.5% by the end of the year. On the margin, a stronger dollar tends to decrease the price of imports, which would weigh on U.S. inflationary pressures through the consumption channel.

At the same time, it would cause foreign purchasers to switch from more expensive dollar-based goods to cheaper alternatives produced elsewhere.

That would dampen the demand for U.S. exports while assisting the shift in policy toward bringing inflation back down around the central bank’s 2% target, even at the expense of slower growth and possibly higher unemployment next year.

The dollar continues to trade higher against the major currencies in what is now a 12-month rally. The dollar has appreciated by 11% against the euro since April 2021 and 12% versus the Japanese yen in just the past six weeks.

This most recent burst of dollar strength is most likely because of expectations of a more aggressive U.S. monetary policy relative to the eurozone and Japan.

The forward markets anticipate the Federal Reserve will accelerate its interest-rate normalization program with 10 additional rate hikes that will push the federal funds rate to 2.8% by year end.

In contrast, expectations are for the European Central Bank to be slower off the mark with rate hikes, pushing the policy only 25 basis points above zero by the end of the year. 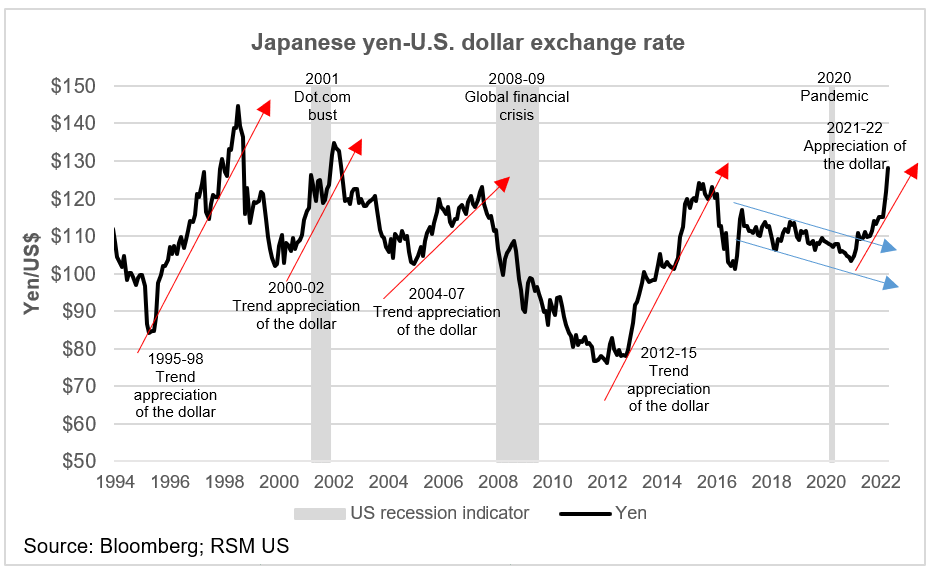 We expect the dollar to hold onto its short-term gains—due to higher returns available for holding U.S. short-term assets and the transaction demand for dollar—and for the dollar to continue its role as a store of value.

As such, U.S. businesses and consumers should benefit from the reduced cost of intermediate products imported from Europe, while the U.S. export sector might have difficulty holding onto market share.

Moreover, should there be an intensification of the war in Ukraine or a policy shift in the European Union toward cutting off oil and natural gas imports, one should anticipate further appreciation of the greenback against the euro and yen in the near term.

We expect the dollar to continue to benefit from its status as a safe haven for international investors and commercial interests, particularly considering the more precarious position of Europe’s economy.

Since 2015, the dollar index—a composite of exchange rates of our major trading partners—has mean-reverted around its 50-year average as a free-floating currency in this modern era of international investment.

This is just the fifth time that the dollar index has reached its current value of 100 in the past five years, suggesting perhaps a maturation of the global economy.

After decades of a postwar roller coaster for currency costs, there is an argument that the distribution of production, consumption and wealth among our trading partners in the developed economies might have reached a steady state.

A more likely explanation for the current equilibrium is that after two decades of low-cost production in Asia, inflation had been squeezed out of the equation for determining the value of an exchange rate.

The absence of global inflation resulted in uniformly compressed interest rates among the international markets and—more important for currency determination—the reduction in interest-rate differentials among the developed economies. There just wasn’t much difference in the modest return on your currency position, no matter if you invested in dollars or yen or euros. 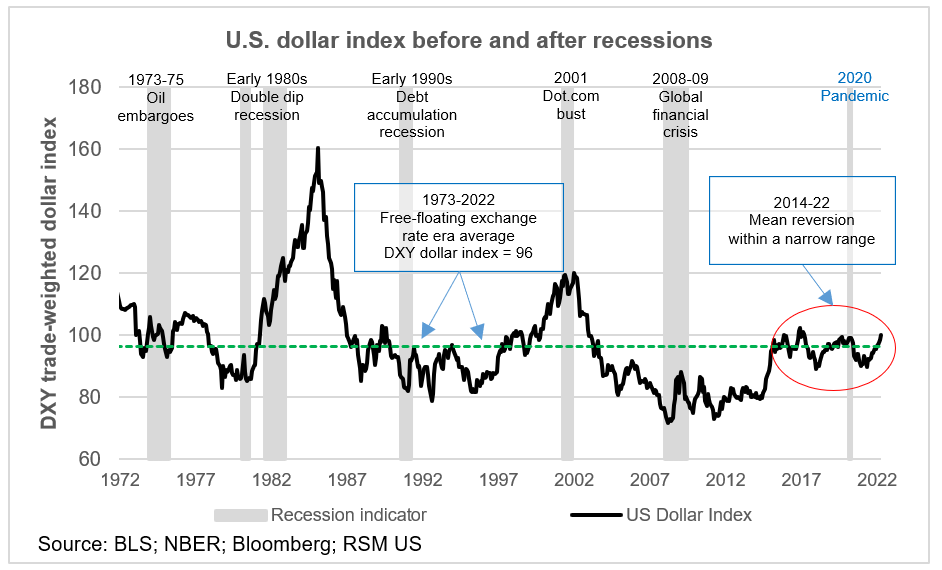 Unlike the emerging markets, growth in the developed economies has been consistently unspectacular in the aftermath of the 2008-09 global financial crisis. And once the base-year effects on real gross domestic product growth during the immediate recovery from the pandemic have diminished, expectations are for annual growth to return to a 2% pace in 2023-24. While the restoration of policy stability and the prospect of economic growth provided the foundation for this most recent episode of dollar strength, we expect the demand for the guaranteed, higher returns of U.S. securities will underpin dollar strength in the months ahead.

There has been a 139% increase in net purchases of long-term U.S. securities since February 2020.

There has been a 139% increase in net purchases of long-term U.S. securities since February 2020, the month before the pandemic. We attribute this both to commercial demand—parking proceeds from import sales in higher-yielding U.S. securities—and to growing confidence in the U.S. recovery and its re-emergence in world affairs and trade.

International demand for U.S. securities is a relatively new factor in determining the level of interest rates, growing from the mid-1990s onward. Net TIC flows have dropped in times of economic and financial distress when investors are more likely to hold onto their cash. Those periods of distress include the financial crisis in 2008-09, the European debt crisis in 2011, the commodity price collapse of 2014-16; and the trade war and pandemic in 2018-20.

We anticipate increasing demand for U.S. securities. That would apply downward pressure on U.S. long-term interest rates even as they move higher in response to increases in inflation.

That would help the Federal Reserve’s efforts to moderate the cost of investment as it draws down its portfolio of long-term Treasury securities at the same time it pushes short-term rates higher to keep a lid on inflation. The restoration of demand for U.S. financial assets is mirrored in the resurgence of investment in the U.S. economy. Foreign direct investment growth appears to have recovered from its 2017-20 downtrend, with levels breaking above the trend line established during the post-financial crisis recovery. If the geopolitical situation in Eastern Europe deteriorates further, one should anticipate a move toward parity against the euro and dollar strength against the major trading currencies until those tensions abate.